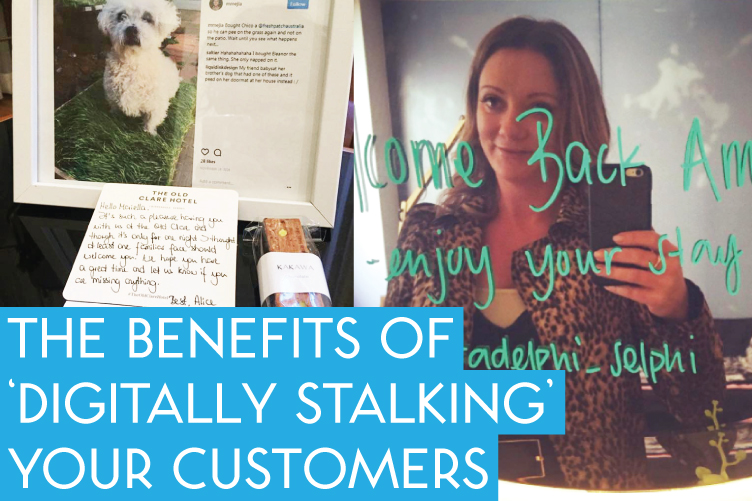 Stalked your customers on social media lately? As creepy as the suggestion sounds, it might be the key to turning them into raving fans.
My good friend Mariella recently checked in to the Old Clare Hotel in Melbourne. On her bedside table was a framed picture of her puppy, printed directly from her Instagram page. The card read:
“Hello Mariella, it’s such a pleasure having you with us at The Old Clare and though it’s only for one night I thought at least one familiar face should welcome you. We hope you have a great time and let us know if you are missing anything. Best, Alice”
Mariella took a photo (of her own framed instagram post) and shared this on Instagram — and Facebook — and admitted that she was so touched she actually cried … in a good way. Her post got a ton of likes, comments and shares. It started a conversation and cemented the loyalty of not only Mariella, but many of her friends, who were wowed by the gesture. Imagine having customers that were loyal, raving fans before they were even customers?

The customer-centric approach playing out at the Old Clare might be a Melbourne hotel thing, as my favourite Melbourne hotel The Adelphi has a similar approach to creating personal touches for their guests. Their signature customisation move is a hand-written, personal message to each guest on the mirror (instead of an impersonal digital message on the TV screen) – the ‘Adelphi Selphi’. They also research their guests online before they arrive and personalise the experience where possible. For my friend Tina (who incidentally learnt about the Adelphi from one of my #adelphi_selphi posts on Instagram), it was having her favourite cocktail personally delivered to her room soon after checking in. She now not only stays at the Adelphi when she’s in Melbourne, she hosts her company’s events there. A ripple effect of tens of thousands of dollars from one hand written message on a mirror.

The digital era is providing, paradoxically, opportunities to deliver highly personal, analogue customer experiences.
I don’t know about you but I find the ‘Congratulate Mary on her promotion or five year anniversary at Acme Enterprises’ notifications on LinkedIn annoying, impersonal and meaningless. But since I got in the habit of taking those automated notifications offline and sending hand written thank you cards and gifts for the ones that are meaningful, the response has been phenomenal. I recently secured a speaking engagement from a client who received one and was prompted to call me. The analogue nature of the message got cut through and I became top of mind in a timely way. That’s a pretty big impact from an investment of three minutes and a one-dollar postage stamp.
A friend’s financial advisor sent her a get well card and care pack last year when she was sick with the flu. She still talks about it.
A decade ago, getting an insight into your customers involved expensive focus groups. And while this type of research is still a powerful qualitative methodology, you can now gain an intimate understanding of who your customers are — including what’s really important to them, their hopes, dreams and aspirations — with a few keystrokes. More importantly, it gives you actionable opportunities to curate highly customised ‘magic moments’ for them.
And before you dismiss the strategy as time consuming and cost prohibitive, try spending just an hour a week on it for 90 days and watch the cumulative effect take hold. The ripple effect could be well worth the investment.
You never know, you might make a customer or two cry … in a good way.