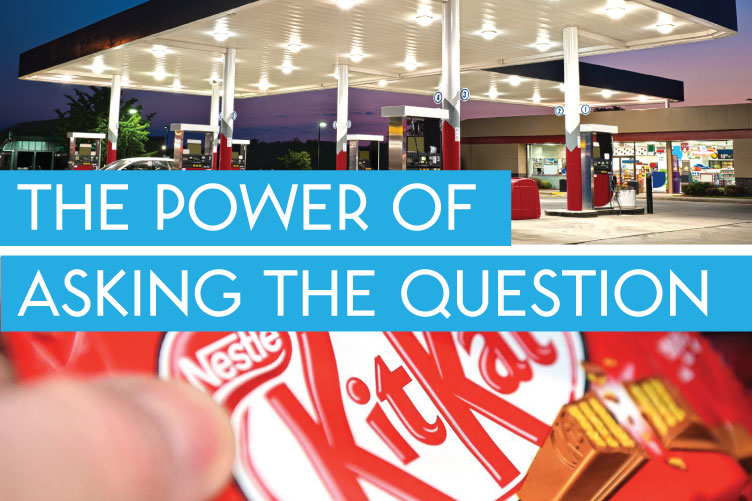 If you’re looking for a great example of a retail channel meeting the changing needs of consumers, look no further than your nearest petrol station.
No longer simply an outlet for fuel, petrol stations are now at the pointy end of convenience shopping and as a result, yield the vast majority of their profits from non-fuel items. And when you look at their point of purchase sales process, it’s little wonder.
Tapping my card to pay for fuel last week, the friendly cashier asked me if I’d like to buy a Kit Kat for an extra $2.
While my willpower stepped in and refused the Kit Kat, my curiosity then took over.
“Out of ten people, roughly how many people buy the Kit Kat?” I asked.
His eyes lit up and he enthusiastically replied “I know exactly how many!”
I was totally unprepared for what he said next.
“6.2”
“Out of every ten people, 6.2 buy the Kit Kat.”
“Wow, I said. And how many customers do you serve a day.”
His eyes narrowed. “Over 1500”, he said with a wink.
By this stage, my head was spinning with calculations (and I was now craving a Kit Kat).
Nearly $2000 a day in additional revenue as a result of simply asking the question. Sure, it means dealing with hundreds of rejections a day but it’s a small price to pay for an additional $679,000 in annual revenue. From the sale of a single chocolate bar.
A few hours later, I got thinking about how this applies to my business and where I was letting fear of rejection or a negative response get in the way.
So I took action immediately. I called some previous clients and followed up on some opportunities. On the first day I secured a $9,000 sale. On the second day, the result was almost double.
And then a few days ago, I did something I’ve been too afraid to do. I emailed my database. I haven’t made contact in a while and I was scared. I was scared of negative feedback and the unsubscribes. But I did it anyway. And guess what? There was no negativity. Sure there were a couple of unsubscribes but nothing like what I’d braced for.
What I did get back was some great feedback, renewed engagement and 2 speaking enquiries!
I also received several emails from people who read my blog and how they’ve applied it to grow their business, improve their levels of influence or launch a new marketing or customer initiative.
I’d love to hear your thoughts, feedback and if there’s anything in particular you’d like me to cover in future blogs or videos.
But for today, think about how fear of rejection is holding your business back from additional revenues.
If it meant an additional $2,000 a day, what question would you be unafraid to ask?
Grab a Kit Kat and ponder that.